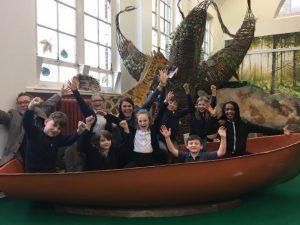 A Norwich Junior School is celebrating a remarkable turnaround, having climbed out of special measures and secured a glowing watchdog report.

In February 2014, Wensum Junior School was told it was inadequate across the board, and put into special measures by Ofsted.

But, four years on, the school has been told it has shaken off the label – and is now good, the watchdog’s second highest rating.

Inspectors praised “inspirational” headteacher Victoria McConnell, who they said, with her team, had created an “inclusive, caring school” which sees “pupils and staff valued and thrive in their work”.

They noted the “rich, innovative curriculum that fires pupils’ imagination”, and how pupils work in an “industrious, good-humoured way”.

Ms McConnell, who started at the school in 2015, said the result was testament to team work.

“It has been a massive turnaround but it’s because everyone pulled together and worked together,” she said. “That’s families, staff and children – you can’t do something like this single-handedly.”

The school’s 2014 Ofsted report was followed by a turbulent few months, with a string of changes in senior leadership.

But it was taken over by the Evolution Academy Trust in 2015, which is based at Costessey Junior School.

Focusing on the latest report, Ms McConnell said the team took particular pride in the praise given to its curriculum.

Youngsters at the school take ownership of their learning, she said, with a focus on picking up skills that can be transferred into the classroom.

For example, they spend a term working as a scientist, or an artist, or geographer.

“It’s a unique curriculum – we want children to become well-rounded in other ways, rather than just reading and writing.”

Tony Hull, chief executive of the Evolution Academy Trust, said: “Wensum was, unfortunately, a school in distress in every possible way. But the Trust and school have managed to turn that around – and it’s fantastic.”

To improve further, inspectors said focus should be placed on upping maths outcomes, which the report acknowledged were already “rapidly improving”.